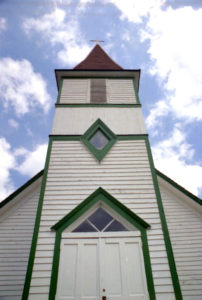 The Scandinavian Lutheran Church, originally located in Farwell, is now part of the Historical Village in St. Paul. Settlers in the Farwell area came from Germany, Poland, & Bohemia, Scotland, and Scandinavia. Farwell first had a Polish name (Posen) but, in 1889 some Danes petitioned to change the town’s name to “Farwell,” close to the Danish rightphotoword for “good-bye.”

The first known Danish Lutheran services were held in the Farwell area by pastors on their way to Dannevirke. The first Lutheran baptism was on Dec.31, 1882. The first funeral was on Feb.23, 1883 and the first wedding on April 28,1886. Organization of the Scandinavian Cemetery Ass’n began in June of 1893.

Occasionally Farwell Danes traveled ten miles to Nysted to attend church services. They decided to build their own church in 1898. Contributions came from Danes, non-Danes and from persons living in Dannevirke, Elba, Nysted, and St. Paul. $768.02 was soon collected, enough to assure that the church would be debt-free upon completion. On Sept.18, 1898 the church was dedicated.

During the depression years of 1931-36, very few services were held. The congregation celebrated its 50th anniversary in 1963. In 1965 the sad decision was made to close the church’s doors. The twenty member congregation held a farewell party for their resigning pastor who had been with them for twenty-two years. Henry Rasmussen, popular auctioneer with family ties to the church, purchased the Farwell church in December, 1967 and had it moved to St. Paul, where it became part of the Historical Village. The last Lutheran services were held in the summer of 1988.

The church is still used occasionally for non-denominational ceremonies, by request. Reservation requests can be made by downloading the request form and returning it along with the required fee.