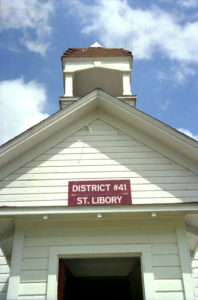 The St. Libory District 41 School came from a German settlement seven miles south of St. Paul. The School was closed in 1964 and purchased in 1965 by the City of St. Paul, which established the Historical Village in park space. The school was the ﬁrst museum building and, from 1965-2001, was used to display all manner of historic artifacts. In 2003 the restored school was dedicated. This building is a monument to all of the one-room schools, of which there were once 86 in the 24 square miles of Howard County. School district #1 was formed in 1872, the last country school, at Bunker Hill, was closed in 1993.

Though alumni of country schools grow fewer, bonds are extraordinarily strong among them. Outdoor play, Christmas programs, and parent parties are some of the most cherished memories. The schoolteacher, often little older than the children, was required to keep the school clean and come early to start the heating stove. She had to maintain order and teach children sometimes much bigger than herself, in several grades. Each class was called to the front to recite its lessons. Children carried a tin lunch pail and walked to school, but laws required that no child should walk more than three miles: Water-came from an outside pump. An exhibit on the St. Paul Business College is in progress on the west wall of the main mom.