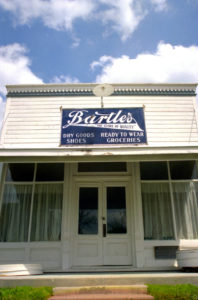 The building bearing the sign Battle’s Store stood on the northwest end of Main Street just east of the old City Fire Hall. In early days of the county, this building was Amsler’s Feed Store. It later became Callahan’s Cream Station, and ﬁnally Pat Kelly’s tavern. It was donated to the Historical Society by the Zlomke family in 1969. Items donated by Bartles, and many county families, present a poignant display of early settlers’ food and clothing needs, stove/lamp supplies, and reminders of illness and early deaths of children.