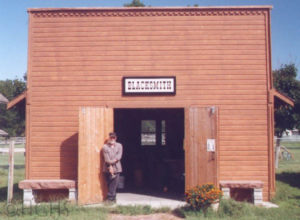 The Blacksmith Shop originally belonged to an early (1871) settler, Waldo Little, but was purchased for the Village in 1970 and moved from Cushing. The building began as a garage and was elongated by six feet after it was moved to the Village. Equipment came from several noted blacksmiths in Elba, St. Libory, and Cushing (Klein, Schwenk, Fredricksen) is on display Henry Fredricksen donated the homemade trip-hammer and Kenneth Simpson donated the very old set of wooden tools.

The authentic forge was built by Jim Peirce and Dave Sprague in 1996 and is used regularly by blacksmith/member Dave Sprague. Notice the license-plate collection of Vigo Kyhn and the barbed wire saved and mounted by Thorvald Jacobsen. Barbed wire was most important to the early settlers, since there was neither rock for walls nor wood for fences to protect their ﬁelds and gardens from being overrun by the herds of cattle driven up to graze on the prairie grasses. The reason for the many types of barbed wire is that farmers made their own before manufacturing companies began marketing it. The Village arch at the south end of the brick walk was built by Peirce & Sprague from an original design. The arch was forged using 1890’s blacksmithing methods, all are hand forged welds.